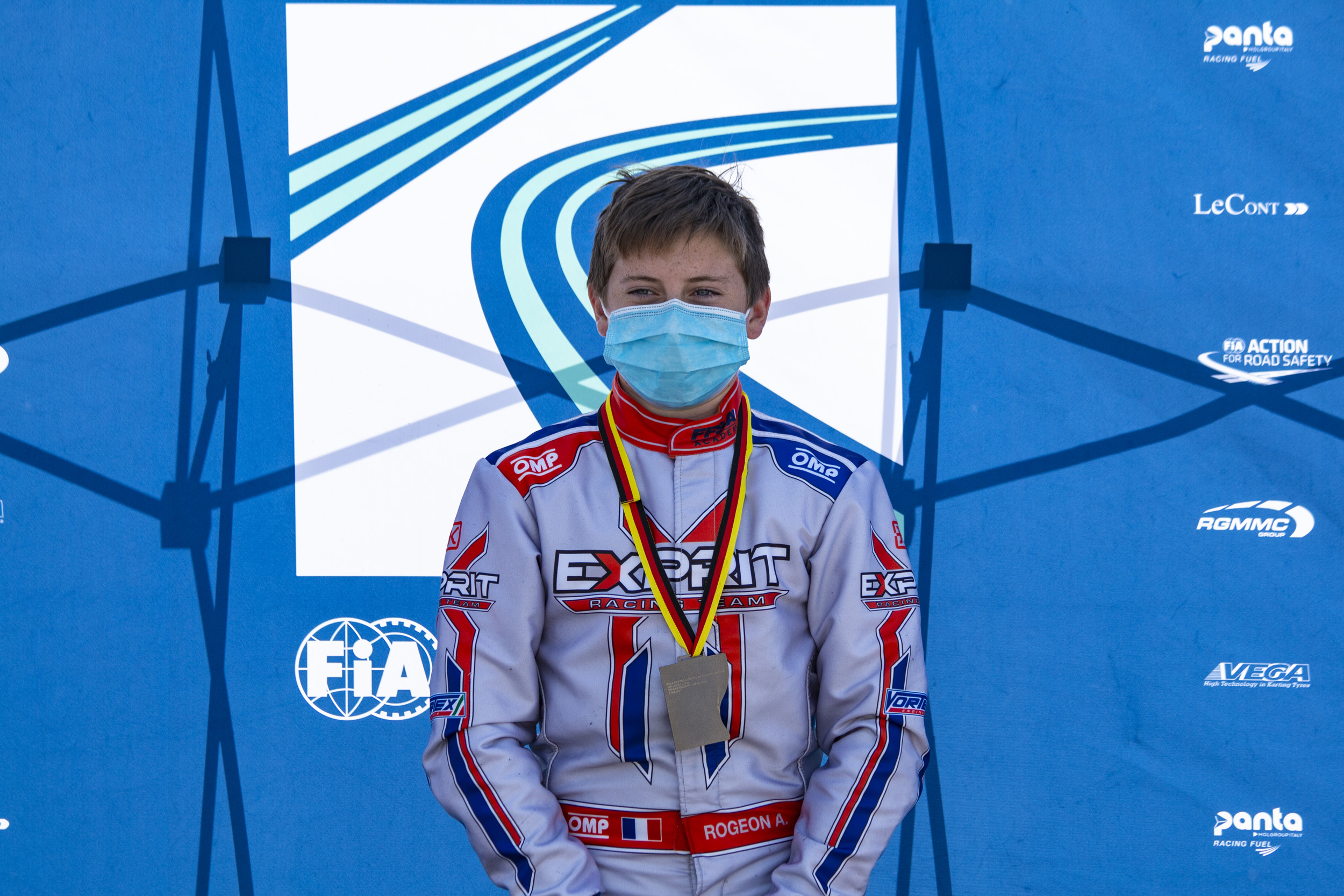 Arthur Rogeon has just had a very enriching experience by taking part in the three events in the FIA OK-Junior European Championship that has just ended on the very selective Wackersdorf circuit. In Germany, the young French hope finished just shy of the top places in the qualifying heats. It’s a shame that a race incident hampered his eye-catching performance.

Rogeon is feeling increasingly at home in the Exprit Racing team and he arrived in Bavaria with the firm intention of confirming the level of performance he’s shown in international competitions in recent months. “The Wackersdorf track is a very technical one, but I really like its specific features. I felt at home very quickly,” pointed out the young driver from the Laval club. “In fact, I finished free practice with the third-quickest time in my group. I was feeling pretty confident before official timed practice. Unfortunately, I made a small mistake that cost me a tenth of a second.”

Arthur didn’t achieve his aim of breaking into the top 10, but he set the 17th time out of 75 and he was the fastest in the French clan. Battle never let up in the qualifying heats and Rogoen didn’t emerge unscathed. “I made a good start in the first heat and I was already up into third place after the first few corners when another driver harpooned me and I had to retire.”  So straight away he was under pressure and he knew that there was no margin for error in the next four heats otherwise he wouldn’t qualify for the final.

The young Frenchman got down to brass tacks, put on a flawless display and reacted with panache by stringing together a series of sixth, eighth, sixth and second places. ”Arthur is as quick as he’s determined and that’s absolutely indispensable to aim for the top places,” added Ludovic Chevalier, his coach. “At times he overdoes it, but the fact that he doesn’t hesitate to take the fight to the front-runners is very positive. In one heat he was on the verge of taking first place. His two fastest laps show his out-and-out speed. He’s made a lot of progress during this European Championship and the experience he’s gathered will be very precious for his future.”

But Arthur paid dearly for his retirement in Saturday’s heat as he had to make do with 22nd place on the grid for the final. “Hardly had the lights gone out when some drivers were already too incisive. There was a lot of pushing and shoving in the pack and I found myself at the back of the field before the end of the first lap.” He fought his way back courageously to 25th place at the finish, but a five-second penalty (incorrect position of front fairing following a contact) dropped him back to 28th. He was the second-best Frenchman at the meeting and also the highest-placed finisher in the works Exprit team.

The mutual confidence between Arthur and his team was reinforced even further at Wackersdorf. “The Exprit-Vortex kart is really very competitive. With my team manager, Patrik Hajek, a former world champion, my mechanic and Ludovic Chevalier at my side I know that all the elements are in place to aim for even greater things. Today my objective is to concretise in the world championships in Portimao. We’re going to prepare everything to be in top form when we arrive.” Arthur will take part in the Champions of the Future series race from 29th October to 1st November in Portugal, a week before the big event!